University of Pennsylvania, School of Design

The Expression of Compression and Tension
Analysis to synthases. From drawing to 3D modeling
The Analysis:
The building is the central cultural facility of the diplomatic quarter in Riyadh, Saudi Arabia. It stands on a high limestone plateau on the edge of Hanifah Valley with expansive dessert from behind. The hot and arid climate of the city and the harsh sandstorms had a significant effect on the building style. The history of the region and its old fortresses also had great influence on the form of the palace. Typical vernacular architecture of Riyadh of load bearing walls, curved towers with protected courtyards that large enough to allow daylight and air circulation are strongly presented on the mass of the building. The Palace was a limited competition where two design proposal were merged together. The first proposal of a terraced building engaging the landscape by local architect and the second proposal of Otto’s tent vocabulary. The building resulted in a snaky 800m long hollow wall with a width of 7-13m wrapped around green gardens and pools with integrated tents on some of the concaved sides of it walls that is program related.
The massive wall “Compression”: The mass of the wall with its curvature and terraces gives the image of a fortress. The stone cladding and the rare scattered windows expresses a heavy load bearing structural wall. The façade colors in combination with the surrounding landscape provide a sense of locality and harmony. The construction of the wall in a massive, compressed and heavy form using stones is an expression of stability and a glimpse of the structural system. But it is not the actual structural system. That’s obvious if we look on the other side of the wall where the stones just stop and don’t continue. The stone is just a cladding on top of a concrete wall. We can also get deeper sense of the structural system through the tiling on the floor which resemble a division generated by the beam modular system. A look on the rooftop revels the actual structural system which is a concert walls/columns and beams structural system.

The Tent “Tension”: Attached to the wall that forms the perimeter of the building, on the outside, there are 3 white tents and two other tents on the side of the garden. Those tents functions as enclosed interior spaces of restaurant, auditorium and living area with stores. The tent elements always express lightness and light weight structure that tend to fly away. Yet its cable network expresses a new force of tension that keep the light tent in place. It is emphasizing the forces that ties the building to the ground. It is also having the gesture of the local people who lived in tents many years ago

The tents are hanging from an upper level of this column with three Teflon fiberglass and two cable networks. The main three tents are supported by radial cables and attached to the spine of the building steel masts in a fan shape. The cables are attached to ground level sloping masts and folding in “A”, hinged and tied to the anchor blocks buried in the rock. On the tangent edge of the tents touching the wall, there is platform that seems to be carrying the weight of the tent while it’s not. It is an expression while it main purpose is to hide the cable and the joints in the interior space. In the outside the tents structure and the cable networks are totally exposed to show exactly what happening on the inside.

The building has a lot of expressions and negotiation between compression and tension. Therefore, the main expressions of the model would be on the structural systems of both the compression loads on the wall and tension loads of the tents. A major detail of the building that has to be shown is the connection and the joint between the wall and the tent and how they negotiate each other.
The terraces on the section expresses the structural system as well as the expressive meaning of the envelope. Part of the elevation that shows the leveling and the layering will be presented to show the transformation from the wall to the curvy tent and then to the structural cables that connected to the ground. It also will include some details of the cable network structure and how its connected from the inside and from the outside.
i Legacies for the future, Cynthia C. Davison
iI The Aga Khan Award for Architecture, Tuwaiq Palace1985
iii Edward R. Ford, A paper delivered at the Norske Arkitektakademi in September 2000 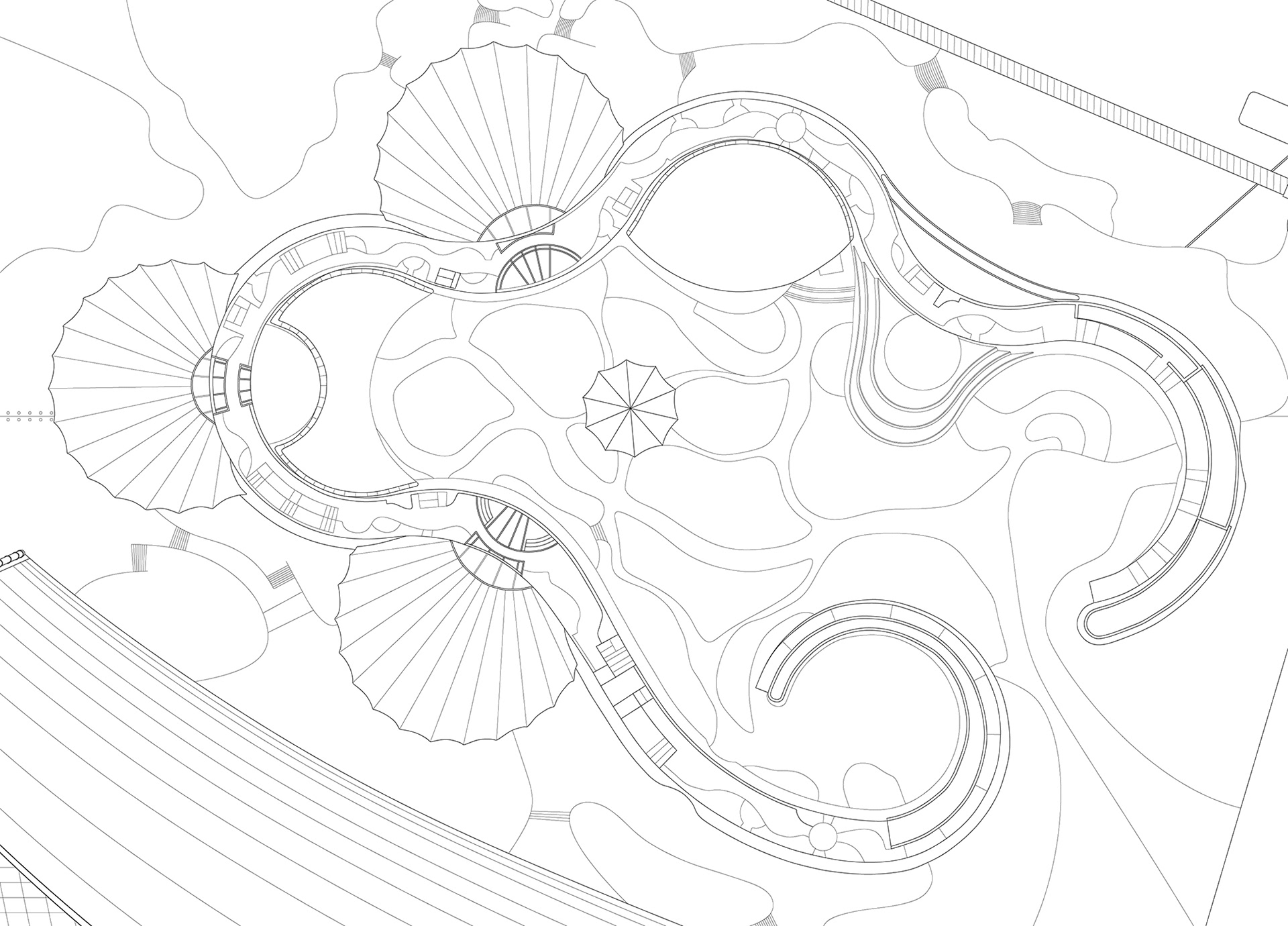 Plan detail as it placed in the center of the canvas and the landscape penetrate underneath other elements. 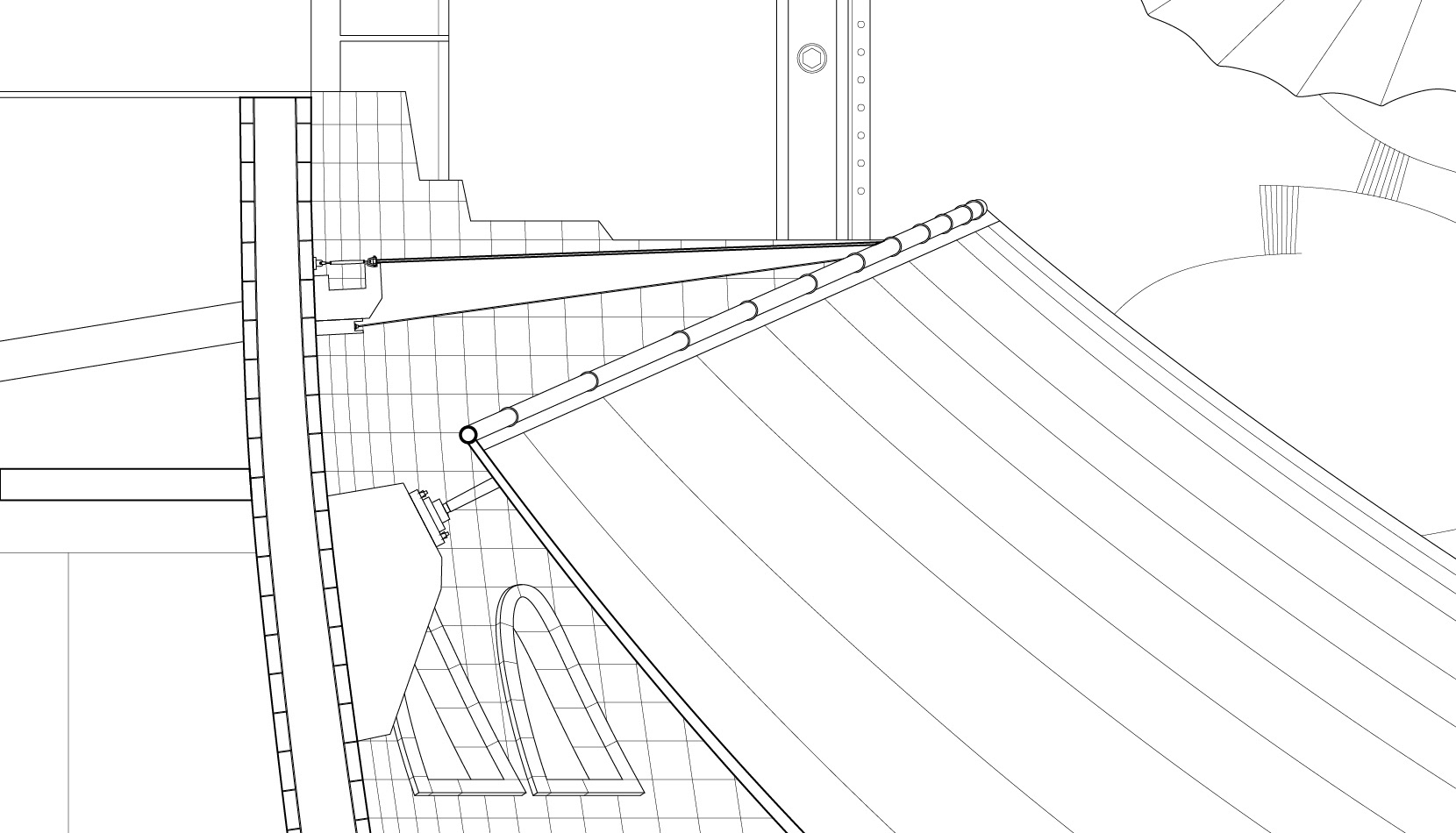 Section elevation of the stone and the tent connection

The cable connection between the stone and tent fabric drafted as a result of the analysis.